Force recognized as the 2017 General Contractor of the Year

contractor membership as to the top-performing General Contractor in the state in the areas of safety, project management, scheduling, timely payment and more. Force Construction also received the Excellence in Ethics award for the third year in a row.

Clayton Force, company Vice President and grandson of founder Don Force, accepted the honors on behalf of the company. Clayton remarked “We consider the ISA members to be the best subcontractors, vendors and general contractors in Indiana who represent the true state-of-the-art of the construction industry. To have received both the General Contractor of the Year and the Excellence in Ethics Awards three years in a row is incredibly humbling and is a credit to our employees, subcontractors, vendors and owners who work very hard to make our projects a success. The Indiana Subcontractors Association has been an invaluable resource for our team and has helped connect us with industry leaders who share our determination and dedication to safety, quality, and value. This reinforces our company’s commitment to our customers, and is reflected in our motto – Nobody Builds Better.” 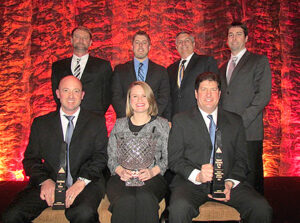